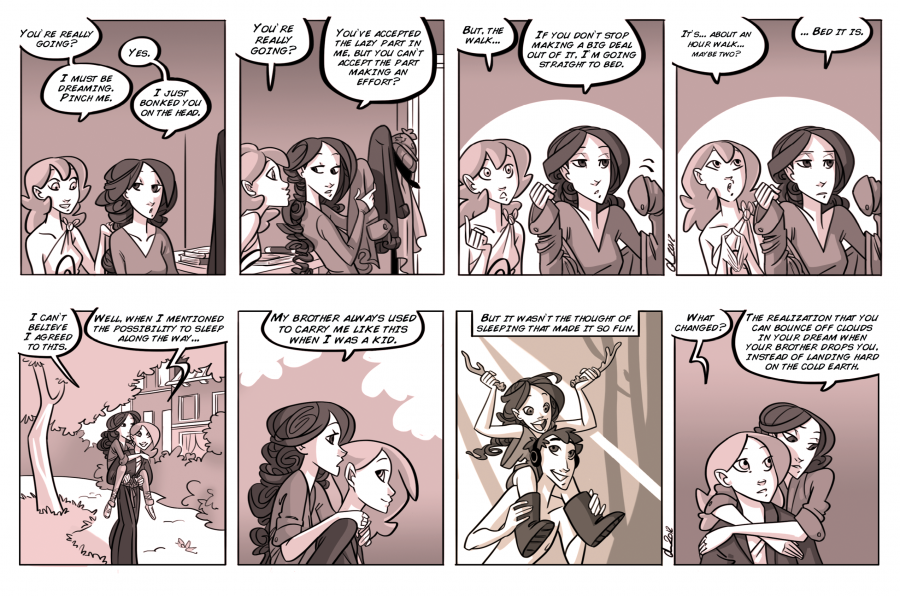 Lillian feels slightly abandoned by her brother right now, thus the "landing on the cold earth" bit. And her dreams makes it all go away! She can forget about fear of abandonment there! yay! ...?

Ah, Roomie's strong, not-realistically-muscly-at-all arms carrying her friend. For a walk that's apparently at least an hour long. For some reason this lack of realism is more obvious to me now than back then. Maybe because I have to do push ups regularly to build up any sort of muscles nowadays and know that there's effort needed to maintain some strength and/or flexibility in one's body.

And no, drinking pints aren't enough ;)

Hah, I remember someone commenting back then, when this strip came out, how it was "weird" that she was having a piggy back ride on her "half naked brother" and I remember my reaction... well, it's still the same reaction now, bewilderment. What kind of life and environment have you lived in that you are weirded out by young sibling being able to run half naked around each other?

I had this moment when I was about 9 years old in the USA, where we were in a group with my class-mates and a teacher, and I said, in context with the discussion, that I took baths with my brother when younger, and my class-mates reacted with a "eeewww", as the american children (and up) like to say. Thank god the teacher was there to let them know calmly that it was fine, and that she did the same she was a kid herself, or else who knows what my kid brain would gather from that.

And I'm still surprised by that. How some are being taught that being nude is such a private (and automatically sexual) thing, even as kids, that you can't even take a simple bath with a sibling, or the opposite sex, or, good lord, both!

The fact that we make such a big deal out of it tells more of our own sinuous minds than any 4 year old kid's.