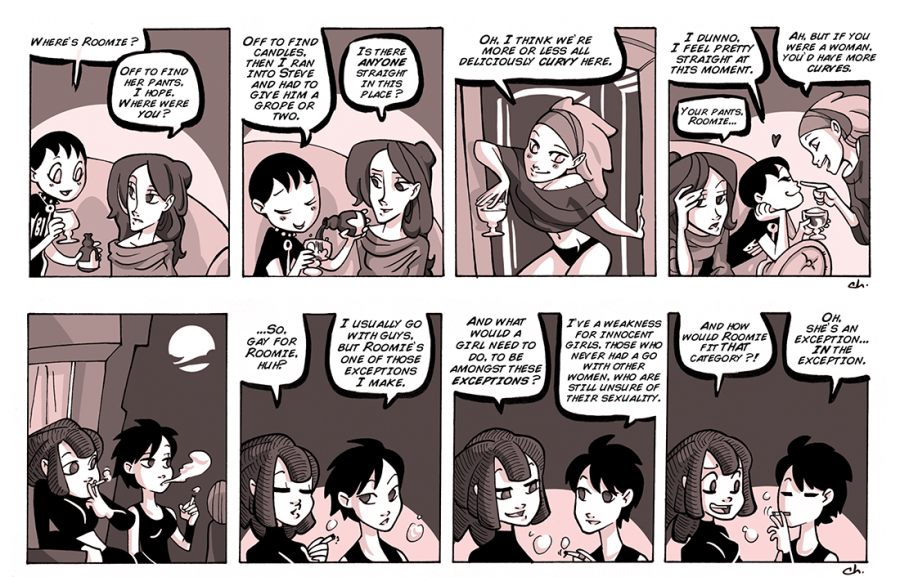 Yes, Inception had come out in movie theaters at that time.

The first strip was all about playing around with terms for sexualities, and to me it was pretty obvious that "curvy" was meant as bisexual/polypan (didn't know about the term polypan back then!) It was about most everyone at Jo's bar being, at the very least, curious and open about any and all genders. And not really fitting into any neat little boxes. All fluid ;)

Did you know? I was once called a homophobic for not having any real 100% gay characters? That was fun. I was of course also called heterophobic for having only one straight person in the comic that I kept making fun of! Which isn't true, since there are one or two other straight characters, but hey. Let's not get too much into facts or nuances, that would ruin internet as we know it ;)

Oh wow, hey, I just remembered I was also called biphobic because of the later strip explaining what pansexuality was (you know, with Allan and Steve and pans).

You know what? I think the only "phobic" of that type I wasn't thrown at was "panphobic" so at least I got that going for me :D