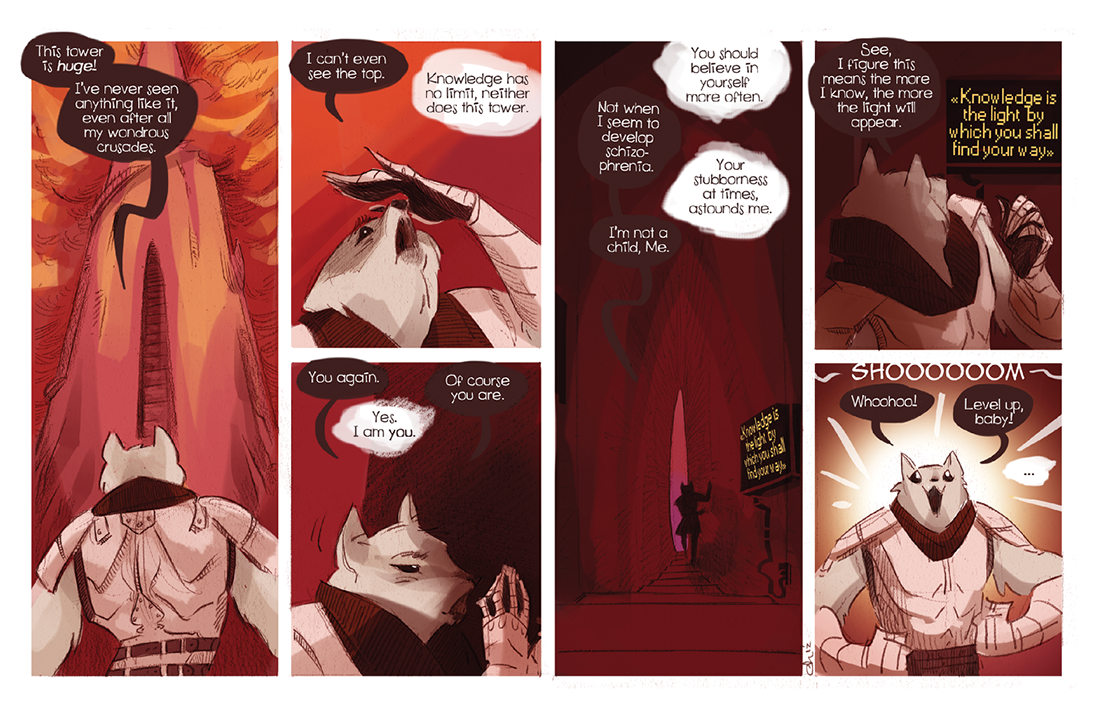 Hmm, I'm unsure if that last panel really conveyed that light just shone out of our dear lil' knight in furs, as it could easily be taken as just a comic book technical choice to put light around the character that just had a nice moment, you know?

If it were me now, I would have zoomed out a bit more on the character to show that the light does emanate from them and is affecting the darkness around them.

And I'd probably change the dialogue text in which the knight implies schizophrenia's what's happening to them. I think especially nowadays, people are being more careful and aware when talking about such chronic brain disorders because of all the clichés and wrong ideas made about them. And even though it can be difficult to abandon such terms when writing, since they can convey such a universal kind of understanding (wrong or not), I think it's great to at least discuss about the problems that can arise from that. And it can be equally interesting to inform oneself on the matter, if not just for personal knowledge.

... which I just did with schizophrenia! What's interesting to note is that there's indeed this misconception of people with schizophrenia being dangerous and isolated, which from this website, says it's absolutely not the case! With the right treatment and conditions, these people can live a normal life with family and friends.

I bet the way our culture and media depict(ed) people with schizophrenia as twisted demons to be avoided at all cost only hurt those with such chronic illnesses and those trying to help them.

Anyway, that was a tangent I did not know I was going to go on (I guess that's the principle of a tangent) so I'll stop here and let others who might know more about the subject discuss it!

Or you can discuss the level that the knight reached. If anyone says "over 9000" I will