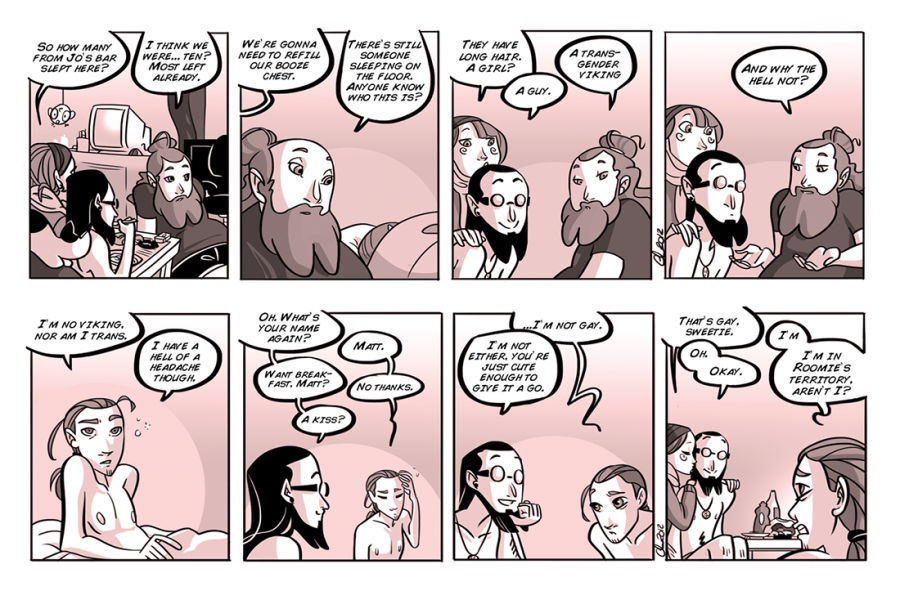 First strip's punchline, Baloo could've said a nonbinary viking instead but it was 2012 back then and we didn't exist yet ;) (or maybe we did but I had no knowledge of it back then!) (tbh I identify more as a sylvan creature in the woods than a viking (my pronouns are now pan/pan) but nb vikings and nordic gods are valid too)

And as for the second strip: I still very much enjoy the flow of the dialogue, and content of said dialogue. I rate it a Roomie territory out of ten. A+. I'm now shaking my own hand in a congratulatory manner. Giving myself many prizes, like a good cup of tea. (Why thank you, me!) (dude, no prob)

Right, so, where were we?

Oh and: just reminding folks that trans people can also be guys and girls, that Baloo's "OR they're trans" isn't to say that trans means a creature from the abyss of no gender (though there are also those types of trans and they rock) and it isn't to exclude them from binary genders like man and woman. (this will be obvious to some, but it's always nice to remind just in case)

That reminder will also come up when Steve and Allan talk about pans later on (remember, my pronouns are pan/pan now! Just kidding. Please don't cancel me I swear these are very funny jokes.) I'll get to that strip when that strip comes up (whaddya know!) but there was a similar tendency of excluding trans peepz with how the dialogue was written. I apologize for the misconception these dialogues can give to people who may not know better.

Shocking news, I know, but I made mistakes when writing GGaR :D