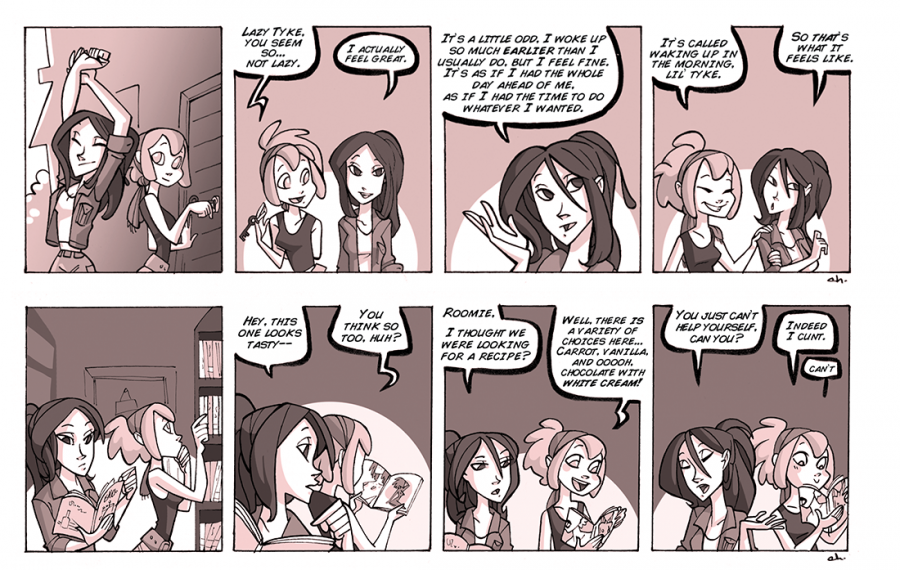 I very much remember that first panel with Lillian stretching, I was (and still am, really) very proud of how she came out! The expression is on point, and I like that it's a silent panel to give it more space and importance.

I must have also been very happy to just... discover more of Lillian while drawing these expressions. It's like discovering your own character more, even though you're the one that's writing/drawing it, it's elating to see them come alive! And that's what it felt like. I feel the best results for me when drawing my characters are when they feel *right*, when they seem to fit that character perfectly, for that moment. Because at some point, they've become people, and I absolutely love it when it feels that even I don't have 100% control over them. That they have a life of their own.

I've always been very much into that sort of meta outlook on creators and their creations. I've even drawn a comic as a teen, way before GGaR, about a girl who was stuck in a place that was in a comic, and she met another girl who was stuck there too, and who knew there was a creator (aka: me) who kept them there willingly. And instead of it being the sexy comic I initially wanted it to be, it turned out super dark at times because I was basically making these characters go into existential crisis and stuck forever there. HAHA WEIRD RIGHT GLAD THAT'S ALL IN THE PAST