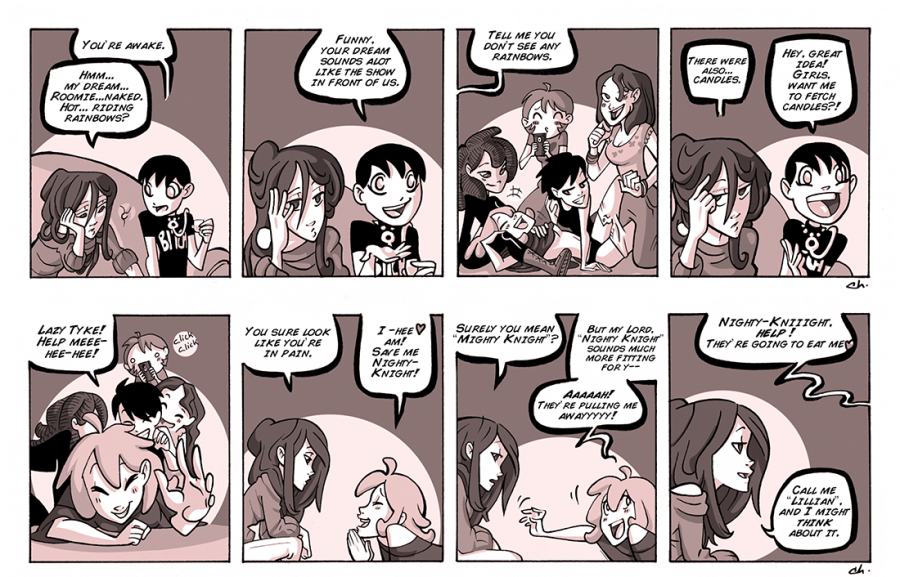 Fun fact! The short haired girl taking pictures with her phone was a potential recurring character! She wouldn't have much of a personality per say (or maybe she'd have her moment later on), the idea was to bring her back as a sort of paparazzi and big fan of Roomie, following her around and taking pictures at comical moments. All of this in a very light and silly manner, perhaps until they'd have a talk and the girl could move on from her obsession with Roomie (and Roomie could have learned a thing or two on herself in the process as well).

Yet another idea that was had but that didn't come up later on! oh well :)

Oh, and another thing that was never brought up in the comic, but that I had originally planned to: with Roomie's and Lillian's banter of "nighty night", and if you remember the moment when they had another banter early on at LT's doorstep, with Lillian declaring a theatrical "so speak, yeh who enters my domain".... basically I had the idea that both Allan and Lillian (and Steve too) had done improv in the past. Which would explain Lillian's little moments of playing along and making a scene out of the situation (very rarely so, but it would happen).

I mean, maybe they did do improv and it just never was told in the comic ;) (how to get away with unfinished plot, part 1)

The character Steve was, as some GGaR characters were, inspired by a friend of mine back then. And that friend was a real improv pro! So the idea came from that discovery, seeing him and others play improv was a real treat, and I love the idea of improvisation on stage, taking ideas from the audience and playing along, etc.

So GGaR could have gone in that direction too, and showed a bit of that. Allan and Lillian could have done improv with Steve Sensei in the past and have a small amount of experience at hand, and, I don't know where it'd lead but, could have had fun scenes with a surprised Roomie!