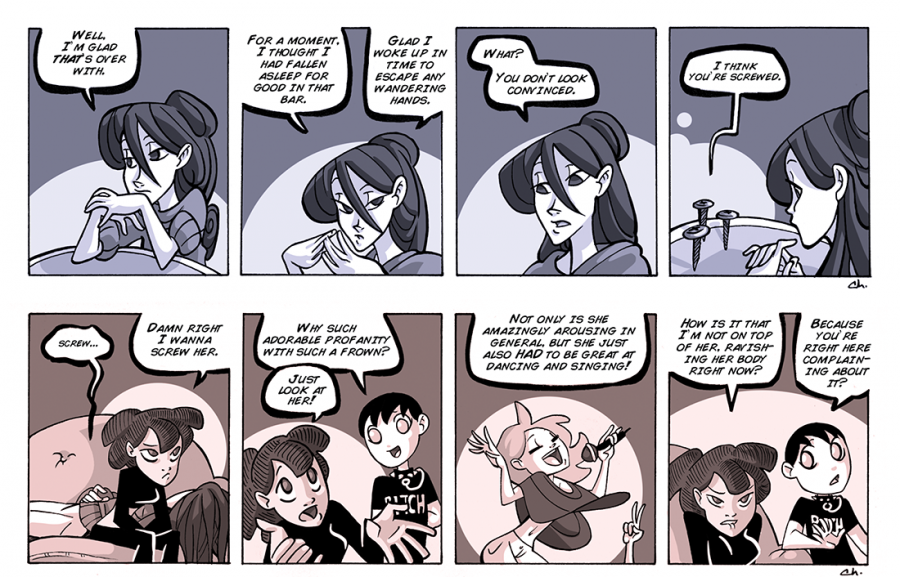 Ahaaa, here it is! Another comic strip I edited years later!

Aggie's last dialogue originally had a similar vibe except with the word "rape" in it (and Richard's response was different as well). I can't remember exactly how I had worded it, but I remember that, at the time, I thought it was just another silly joke one could still make back then in 2011-2012. I remember still updating these strips on deviantart at that time, and there were one or two comments bringing up the fact that maaaaybe it wasn't such a great joke. I didn't change anything until years later, when I looked back on this strip and went "WOAH" myself, and found this better ending.

And it is better, like, some would complain about changing past pages, that it was funny in the past (for some), etc, but in all honesty, I just prefer this punchline way more because of Richard's reply that resonates better with my beliefs. Which is the simple reality that we often complain about something rather than doing something about it. Even when they're right in front of us.

And of course I just don't have the same reaction to jokes about rape as I did ten years ago. Call it PC if you'd like, but beyond the fact that we don't need certain types of jokes any longer (be it racist, homophobic, etc) that can hurt certain groups of people, but it's also not funny because those jokes have been done too many times. Beyond the questionable aspects, it's just unoriginal. It's been done. It's time for new jokes that reflect today's world better, time for some creativity and freshness!

You can't change change, so better ride it along and see where it leads us. Plus, if you're riding it well enough, you can probably steer it better towards the direction you want.