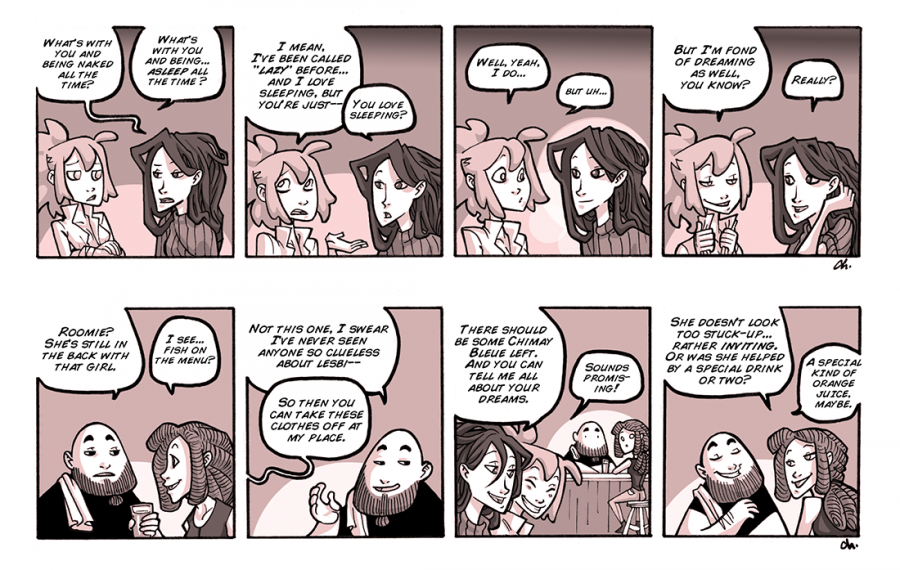 Jo's face is transforming into an onigiri, guys. Help!

And here we have one of the mistakes I'll plainly admit doing and going as far as re-writing dialogue years later. Jo himself had actually told me right after I drew this that it was something he would never do: serve an alcoholized drink to someone who didn't clearly ask for one. But 20 something year old me thought it was no biiiiig. It's a comic, it's for fun! Right?

Well, each of us may have a different outlook on the 'it's just a comic' phrase, but since this specific part didn't serve any story purpose, I went ahead and actually changed the last bit of dialogue in the second strip. Jo originally answers Aggie with "I told her it was orange juice", which made it clear that he had spiked Lillian's drink, consciously so. I changed this dialogue to make it sound a little more vague, and later on, much later on, in the comic, we'll get a little more information about this very moment. (and whether it was conscious or not, in the end)

Anyway, all that to say: some things can be normalized, such as the use of alcohol and how "fun" it is, and I was definitely into that sort of energy back then. Now you probably know that my point of view on this has changed quite a bit since then, and I've never questioned this normalization in society more than I do now. Since Roomie's own path with alcohol is a subject that has its own importance later on in the comic, I thought that, in this instance, a re-writing of the script was just.

Not justifying myself, just explaining this change in more details, as I think it's an interesting subject to talk about :)