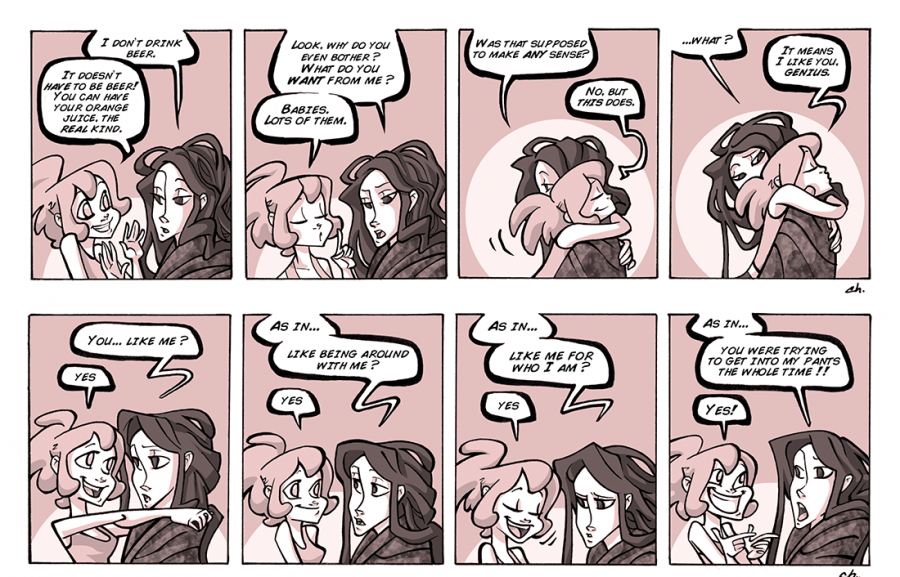 Last panel: is this the first time I drew Lillian without the lids above her eyes (to represent tired eyes)? I was pretty aware of how I was drawing Lillian and how I could easily change little details like that to show her evolution towards a bit more.. .vitality :)

Oh and it's a new week, so I'm able to gather the questions you might have had for me from last week! Let's see what some of you were curious about...

Someone was asking how much I knew then about Allan having a fiancée, and how Lillian had no idea, nor did she know about him being bisexual, etc. It could seem odd that she didn't know about Evelyne, but then again, it could serve the purpose of amplifying Lillian's cutting off from the world through sleep and staying home/in bed for as long as she could (to the point of not even knowing about her brother's doings). Though maybe she's not as ignorant about it as we think :) Also, Allan probably didn't tell her so she wouldn't think he was abandoning her, since both of them have their own issues regarding that (mainly because of their parents).

How much of all of this did I know when writing these strips? Probably not a lot, if at all. Go Get a Roomie, especially in its early chapters, was very much a "no script, just draw whatever comes up on the fly". Though some ideas could pop up here and there, and I'd start jotting them down.

It's only after maybe chapter 2 or 3 that I started buying notebooks dedicated just for GGaR scripting and thumbnails. And only later on still that I found very handy moleskine sketchbooks that had four panels already printed on each page! That was a real nice discovery for me :) (>if you want to see what it looks like<)