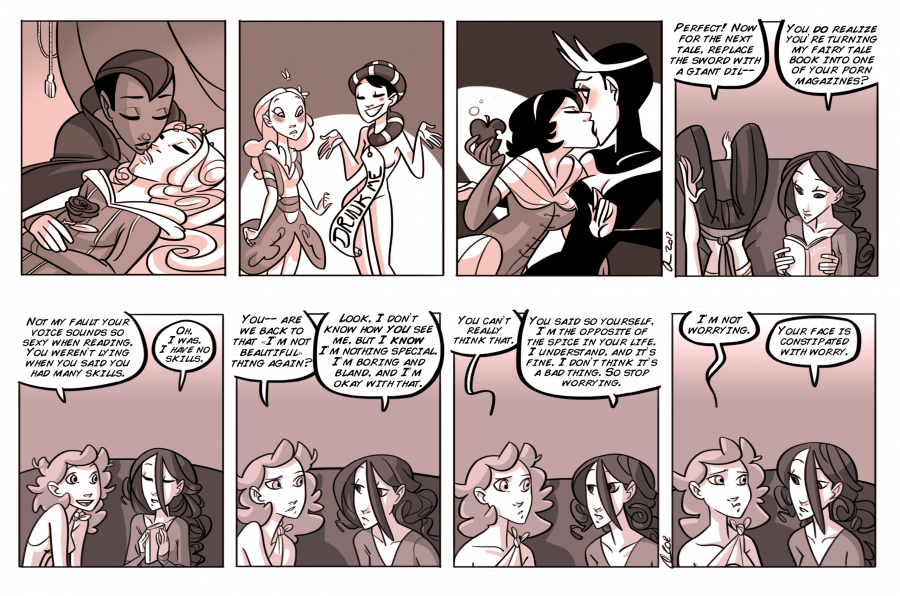 First panel: that looks like an uncomfortable position to try and kiss a blushing princess. The third panel looks better ;)

It's hard drawing people kissing! It's not the first time I say it, and it won't be the last, but interacting bodies are a real challenge for artists and I admire erotic/porn comic artists for making all of it... work!

Also, those fairy tales look like they make great stories, I especially like the assertive Snow White. My horniness at the time definitely made these strips that much easier to create.

The second strip tells of Lillian's "acceptance" at being "bland", in her own eyes. That's interesting, I didn't remember that scene exactly, and I'm glad it's something that's changed as time went on between the two. Even though it's not explicitly said in future chapters that Lillian feels different about that, about herself, but I know it to have changed since then, and I'm very happy for her! She doesn't necessarily find herself "special" in the end of GGaR but... would definitely know herself to unironically have certain skills, and respect herself a little more for that.

What would she say of herself? Instead of "bland" she'd say... well, she'd understand better why the people, the family, around her love her so. She'd accept that she's beautiful and unique in her own way :)