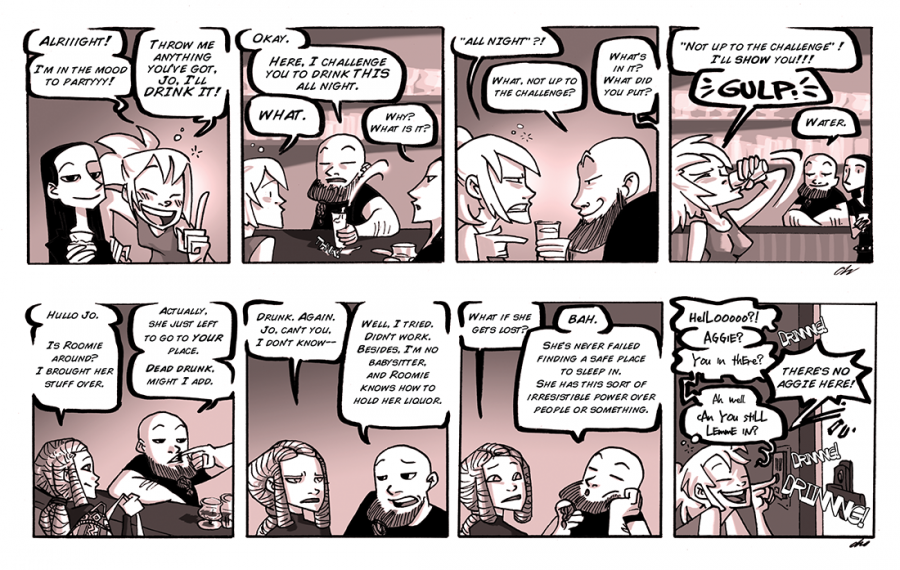 Haha, well, 20-something year old chlove was at least a little aware about alcohol problems! That's good to see ;)
I also like the challenge Jo gave to Roomie, though she didn't quite follow it until the end, apparently.

AND YAY! I didn't realize we'd get to see one of GGaR's favorite character so soon, she's riiiiight around the corner :D

I also like how I wrote the dialogues and punchlines in these two strips, it ain't half bad! Dynamic, overlapping, but not too much. Could be a little more polished but the energy's there!
These days I tend to avoid using more than one sentence a bubble, it adds even more dynamism into the dialogue and it's easier to read for the viewers! Here's a Headless Bliss page for a good example of how I "separate" dialogue into their individual (but still connected!) bubbles-> www.headlessbliss.com/comic/page-381
I also like to vary bubble shapes, as you can tell in these above strips, or those on Headless Bliss: shouting, crying, whimpering, seducing... each tone is represented by different ways of drawing the "bubble", and its "tail" that shows who's speaking. It's fun to do, and it adds a lot to the characters' expression!

-> A short extra GGaR comic has started on >my Patreon!< it will run for about seven weeks (one double strip a week) and features our two main ladies after the GGaR ending happened. The whole short will be publicly available once it's all finished, so donating on patreon gives you an early access to it + comment section accessible. (and of course the +600 past patreon-exclusive posts to check out AND a big thanks from yours truly)