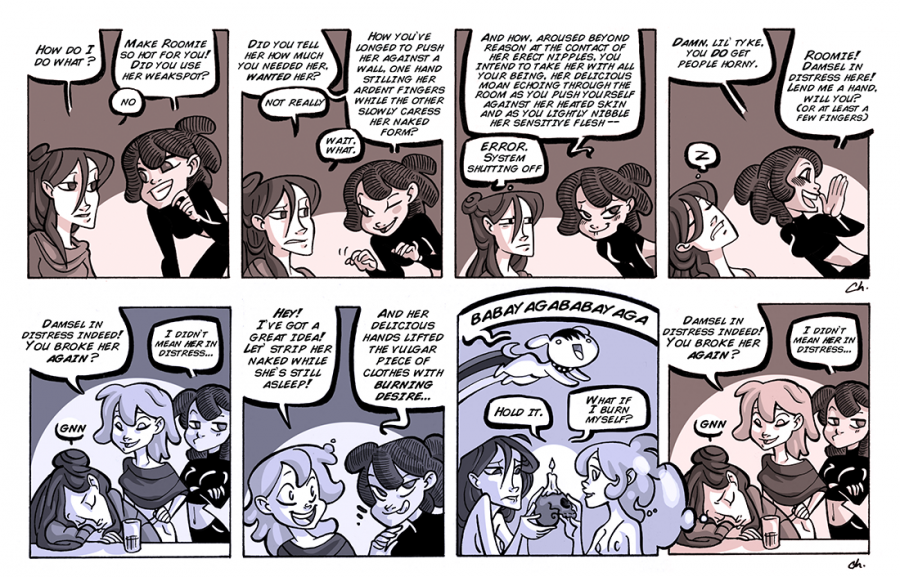 I've always liked meta jokes, surreal drawings, psychedelic dreams, or symbolic moments. This second strip was one of those times when I could express some of those interests :)

It was thanks to Lillian's dreams and story-telling that it was possible for me to explore some new ideas, and even new drawing styles, as it will show in later chapters. Thanks for that, Lillian!

I don't exactly remember what I wanted to represent in that panel with dog Richard farting a rainbow and Roomie giving Lillian a skull with a lit candle on it but I'm sure it did symbolize something :D "Baba Yaga" is a popular Russian tale, with many versions derived from it, that can be very interesting to analyze and interpret. The skull and candle is most probably from that tale (not richard as a dog farting rainbows though, at least not from what I remember).

Here, I'll try giving my own interpretation from me now, without much memories of what it all meant back then:
the little skull could represent a "small death" of Lillian's, for example, her tired and introvert self dying a little by being at the bar with newly found friends that have such an unfamiliar lifestyle. Lillian's afraid to burn herself with the light it may bring her (we're all afraid of unknown territory, even when we know it's a positive change). Roomie being the one representing that unknown territory, of course, and richard is uuuuuummmm ...