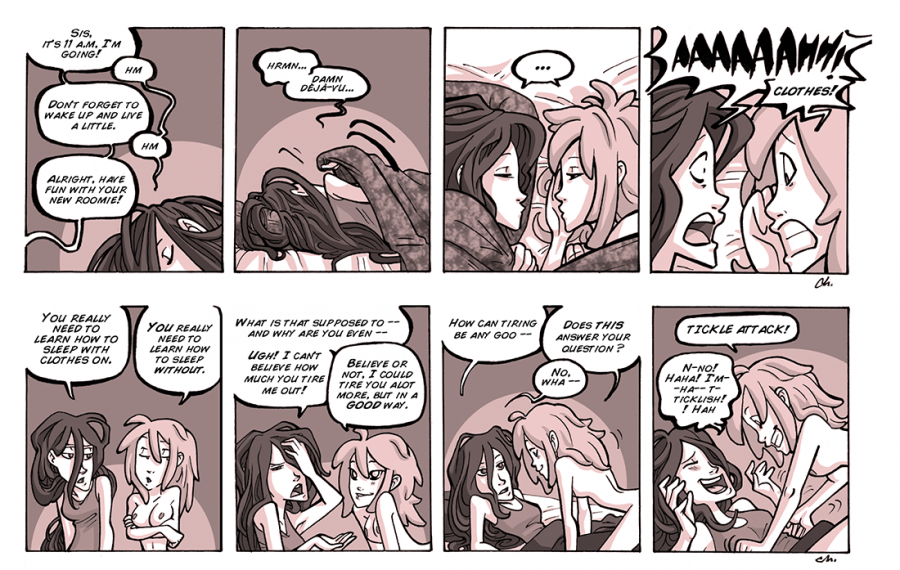 Quite proud of that chapter title, not gonna lie.

Aaaand another scene where boundaries aren't respected! I must have been at least a little conscious of this, since Roomie's once more making it seem like she's going in to get what she wants and at the last moment making it into something more innocent.

This reminds me of something that I've heard many times regarding these early interactions between Roomie and Lillian: "Imagine if Roomie were the opposite sex, this would be unacceptable!"

Yes, the fact that Roomie is a woman does not excuse her pushing someone's boundaries when said someone is clearly stating her discomfort with it. So I can understand the underlying "we shouldn't find it acceptable when cis women do this when we're so adamant about it when it's a cis man".

However, I don't totally agree with the sentiment either, or rather it's simplicity in replacing female Roomie with male Roomie and it being the same situation regardless of the sex. Because, in our current culture, we do not react the same way when seeing a man or a woman in this sort of situation. Because in the history of sexual harassment and violence, the percentage of men is clearly superior. Does this mean that women can't be violent, or can't sexually assault another person? Of course they can! Anybody of any group of people can act in horrible ways.

But personally speaking, I won't see two women pushing each others' buttons in bed the same way I'd see a man and a woman doing the same thing. And that might appear as prejudice on my part, but I can't help being more vigilant with these sorts of scenes when a cis man is starting to feel more dominant than if it weren't a cis man. Because historically, we've seen it a thousand times (and a thousand more), be it in movies, in our culture and art, and in real life, and we've seen how these scenes can take a bad turn. The emergence of feminism is a reaction to the patriarchy (aka: male-dominant society) we live in today and how it harms everyone in it, not just cis women, but cis men too, and god knows those who fall outside of the binary: trans, non-binary, intersex, etc etc.

It's not something I think is particularly fair either, to react differently and so strongly depending on what gender someone is, it's just a sad reaction to what history and culture has shown us one too many times, you know?

I'm not opposed to different opinions on this, just conveying a thought of mine I've had for a while, in regards to the "if Roomie were a guy" comments. Thought it'd be interesting to talk about, and I feel like these sorts of topics need to be discussed in today's society.

Which is why even with bicep muscles I wouldn't be seen as more intimidating :D (but I'll still continue my push-ups!)