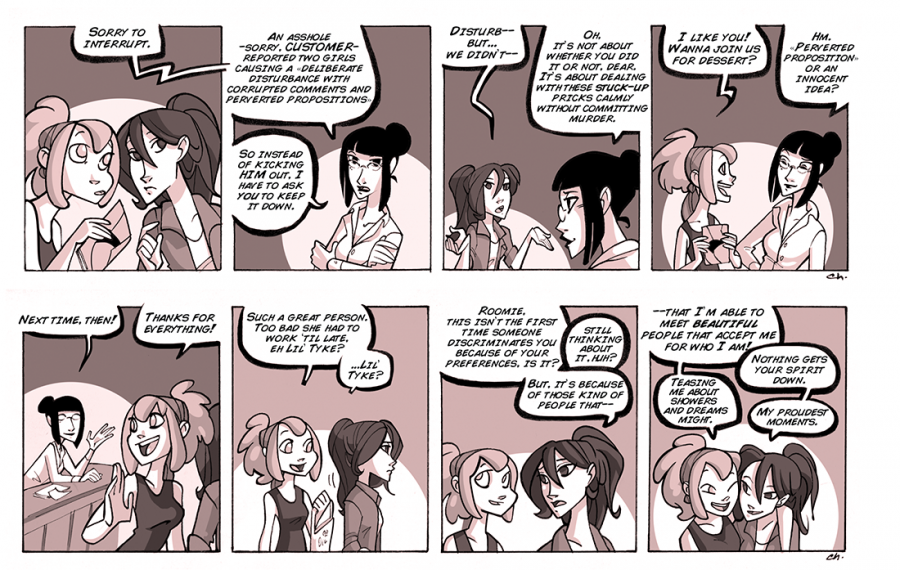 I mean, she could have very much told the discriminating customer to just get out but I guess Evelyne, uh I mean, the bookshop lady couldn't do so for some reason. I do remember specifying later on that she was working for her parents' bookshop at the time so maybe she had to respect rules she didn't make herself.

I don't think she was supposed to become a very important character. Just a very nice bookshop lady. She became something else entirely later on, huh? :D

Discrimination isn't something GGaR talks much about. This may, in fact, be the only moment where it's shown, at least towards non-heteronormativity (phew, that's a long word to write).

This is most likely due to both the fact that all GGaR characters are either queer or "allies", and the story's about them and their queer-friendly environment, but also because I don't feel like I've lived much discrimination myself, especially compared to others and the stories they might tell. The way I've lived it is way more subtle, not outright hate or anger (or so rarely I hardly remember) more like looks that might say "I'm not used to seeing two women holding hands like this" and such. I'm thankful for not having experienced too violent reactions!

Though I'd love not having to hear another guy trying to convince me it's better if I were with a man (aka: them) :D (don't worry, that hardly ever happens any longer either)

Anyhoodle, that character from last strip saying "lesbo"? I had the idea to have them have a difficult talk with Roomie later on, where we'd figure out that they were a closeted lesbian and by the end of the conversation, would be more accepting and feeling less scared and angry.