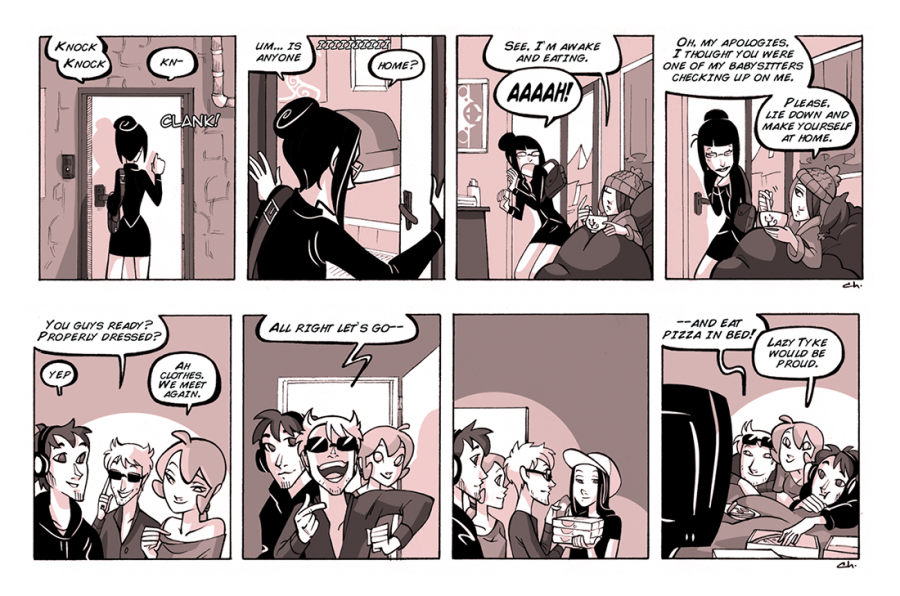 "Lie down a make yourself at home", nice one past-chlove. Not only is it a funny line to say, but it fits the character like a glove!

And I'm quite fond of the second strip as well, for some reason it feels extra-nostalgic to me. Those moments of laziness with friends, in front of a screen and with an ordered pizza at the door, right after a drinking night. And everyone would put on their favorite videos, or music or sketches... Those were fun and easy times.

Oh and let's return to the first strip and add a little fun fact: the house that Lillian and Allan were living in was based of a friends' house that had two entrances, two doors. So Evelyne was coming to knock at the back door (harhar), and usually we see characters going through the other one in the rest of the comic. At the time of writing this above strip, I probably thought I'd one day mention that in the comic, but it never happened. So I'm writing it here!

I also always wanted to come back to that house and ask that buddy if I could revisit it to take photo references. It sadly never happened, even though he was very opened to the idea!

--> This is a rerun of the finished webcomic Go Get a Roomie! You can find these two strips in the old archive >here