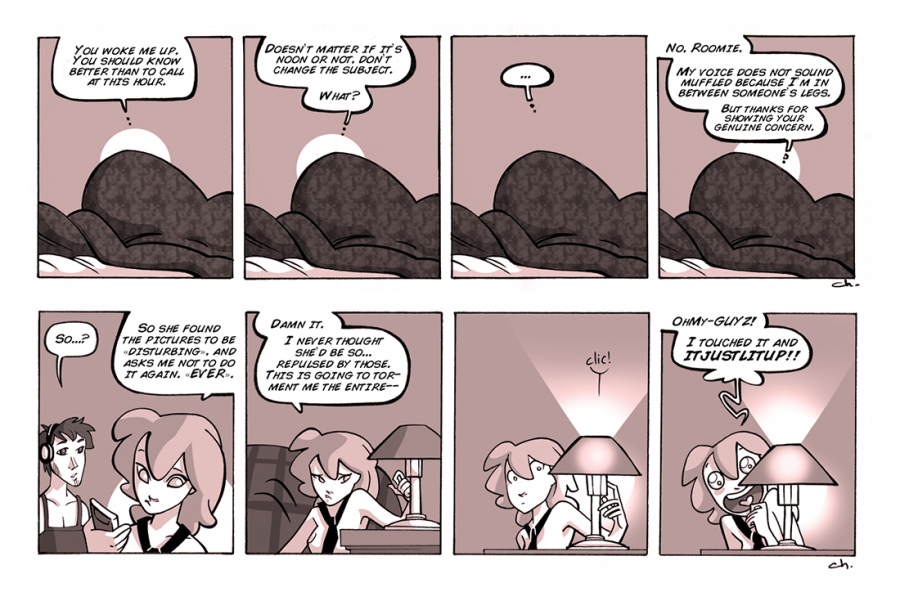 I'm sure I had already mentioned it in the first GGaR run but yes, I had recently found out that there were lamps that lit up when you just touched it, and yes, I was excited and had to add it in the comic.

But I'm more interested in Roomie's first reaction, where she genuinely looks bumped out and admitting that Lillian's reaction will torment her (at least for five seconds). I didn't remember her having these moments so early on in the comic, where you can see a bit of her... appreciation for Lillian :)

And again let's talk about the drawing side of things: the bubble I keep using for (almost) every strips, you know the white circle that's always around the characters? Well, I could've not used it for the first strip. Or differently. But I feel that in this case, the circle was too small, too awkward, too much in contrast with everything else around it, it just doesn't fit well here.

It's only later on in the comic that I'll learn how to use the power of the half circles better (btw, that "half halo" was absolutely taken from Danielle Corsetto's "Girls with Slingshots" webcomic, something I admitted to her years later when meeting her!) :)