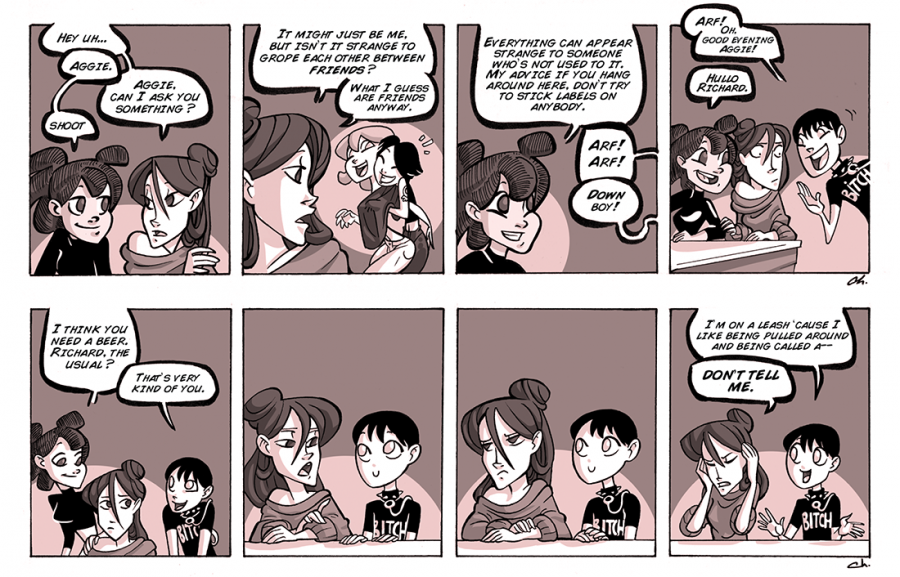 I like these sorts of punchlines, like that first strip with Richard clearly giving himself a label, when there's a direct contradiction to something a character has said that might sound profound and philosophical. Not that it means the "profound" bit wasn't being serious, but it shouldn't be taken so seriously either :)

It's also a satisfying way for me to express personal points of view without making them feel like an Absolute Truth (tm). Not that all GGaR strips play with these sorts of contradicting punchlines, and I'm sure there are a few strips of mine that can take itself a little too serious, or who could've used a bit more "flexibility" in its angles. But I'll do my best to not judge those strips too harshly when they come around :)

Changing subjects! I'm happy to see Richard's arrival :D At that point, there was no other purpose for him than to show Lillian another side of Jo's bar she wasn't familiar with. And to add more variety to the kinks one can have. There was no sibling attached to this character, no background whatsoever... as early-GGaR is known to do :)

I would have never guessed all the adventures he'd be part of later on... and I'm glad he stuck around! Just look at that cute and polite masochist. How could I have left him in a corner of Jo's bar as a simple practical asset??