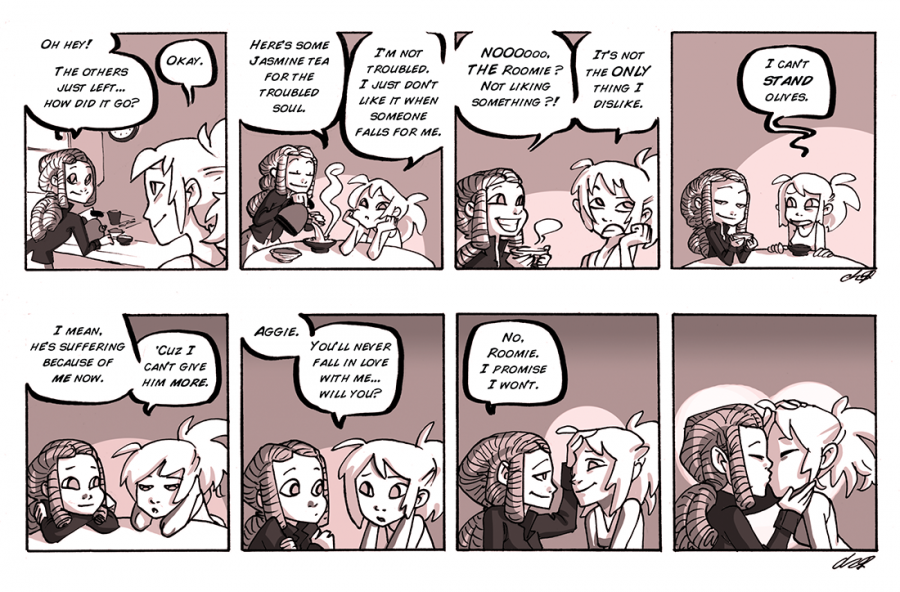 I wonder if there are any new readers following the rerun updates? That would be interesting to see!
And just in case there are, I will not spoil anything.

... which is kind of hard right now, because I don't know what else to comment on except about what's going on here, and how things may have evolved later on :D

So instead I'll go on and say, that this is the end of the first chapter! And all things considered, nice going past chlove! You started this comic very impulsively, but the first chapter still holds up as being a nice introduction to who Roomie is and what her lifestyle looks like, and perhaps even the things to question and ponder upon.
Next update will be the start of a new chapter, and a first (/second) look at upcoming characters<3

Thank you to you roomies for reading this rerun! It's fun getting back to it all, and reading the comments too. I think it'll run for about two and a half years in total, because of how much is updated per week. That's a lot of commentary to prepare from me, so hope you don't mind if ever they run short of interesting things to say sometimes! I'll do my best to keep it lively :)

**a short extra GGaR comic has just started on >my Patreon!< it will run for about seven weeks (one double strip a week) and features our two main ladies after the GGaR ending happened. The whole short will be publicly available once it's all finished, so donating on patreon gives you an early access to it + comment section accessible. (and of course the +600 past patreon-exclusive posts to check out AND a big thanks from yours truly)

--->Kickstarter for GGaR BOOK 3<---- (still ongoing, still doing awesomely, thank you so much for the support!!)