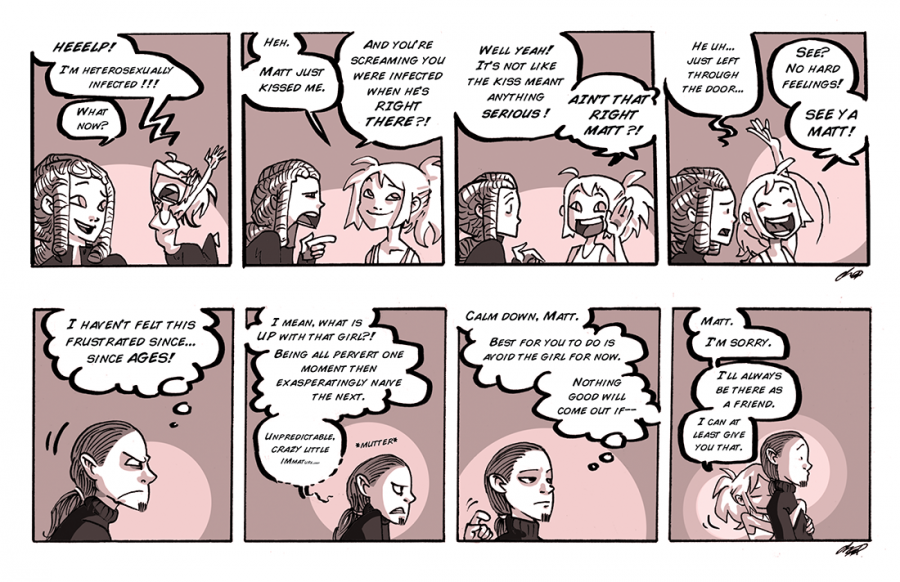 Aggie really changed physically throughout the comic huh? I don't know when specifically I decided she'd be black (probably when I colored her skin with something other than white!!) but as big a change it was, I'm glad I took that decision. When starting GGaR I had no idea, none at all, that it would become such a long ongoing webcomic! So as time went by, and new characters created, I looked around the GGaR cast and realized it was predominantly white characters all around. Which isn't necessarily bad, but I wanted my comic to have variety, and for people to recognize part of themselves in it, especially those who lack media representation. Queer characters I had, because I was (and is) very queer indeed, but I admit not thinking further than that when starting GGaR (and having predominantly white friends myself). My desires and realizations changed in those ten years of doing webcomics, and I wanted a more colorful rainbow, if you will, reflect in the cast members.

And that's one of the reasons why I also finished GGaR end of 2020 to start another brand new story! I wanted a whole brand new blank paper in front of me to be able to color it once more, with brand new characters and backgrounds to explore.

Also, Roomie hugging Matt: she meant well. Nowadays I would not see it as a good as an idea as I once thought it was :)

**oh and the short GGaR comic has just started on >my Patreon!< it will run for about seven weeks (one double strip a week) and features our two main ladies. The whole short will be publicly available once it's all finished, so donating on patreon gives you an early access to it + comment section accessible. (and of course the +600 past patreon-exclusive posts to check out AND a big thanks from yours truly)