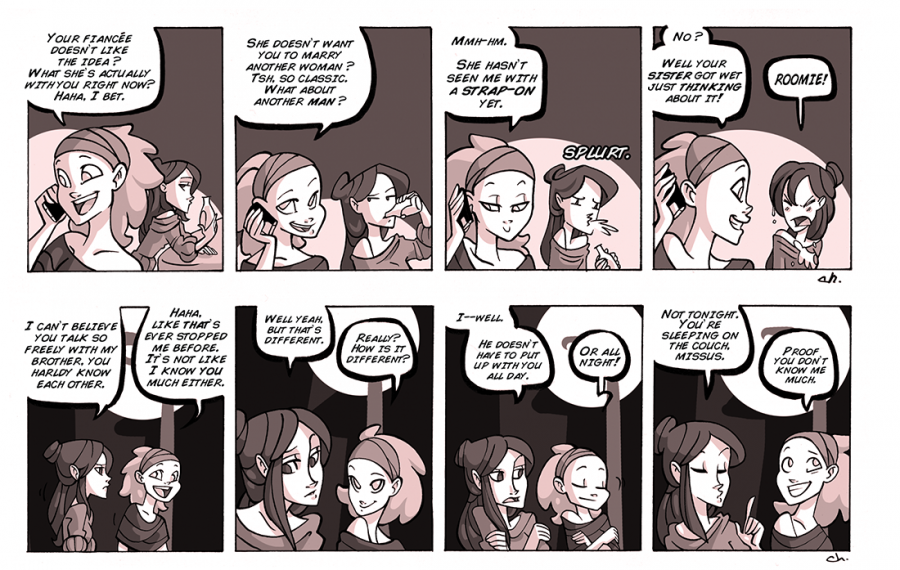 The font used for GGaR (before I switched to handwriting much much later on), is called "comic book" (I know, original!) and it didn't have the letter "é" that us frenchie have on our keyboards. And "fiancé" has that little accent on the "e", so I had to manually add the accent everytime I typed fiancé FASCINATING I KNOW but hey, it's part of the process!

I've always like the first strip. Dynamic, efficient, and fun to imagine Roomie proudly wearing a strap-on. (isn't that right, Lillian? You who prides herself on your vivid imagination :D )

Second strip: drawing someone crossing arms is hard! And it shows in the third panel that I needed reference before anything else (and I most definitely didn't use reference, considering how I drew them).

There are many times I could have (should have) used references for certain things: be it poses, objects, angles, etc. Then again, when you make a webcomic that updates three times a week (though at this point in time, I was still struggling with self-discipline and was often late in updating strips so regularly), and then when you get the bright idea to do a second webcomic in parallel with your first one (talking about Headless Bliss), well, sometimes quantity rules over quality!

Oh and Roomie, if you sleep at someone's house, maybe let them choose where you sleep :)