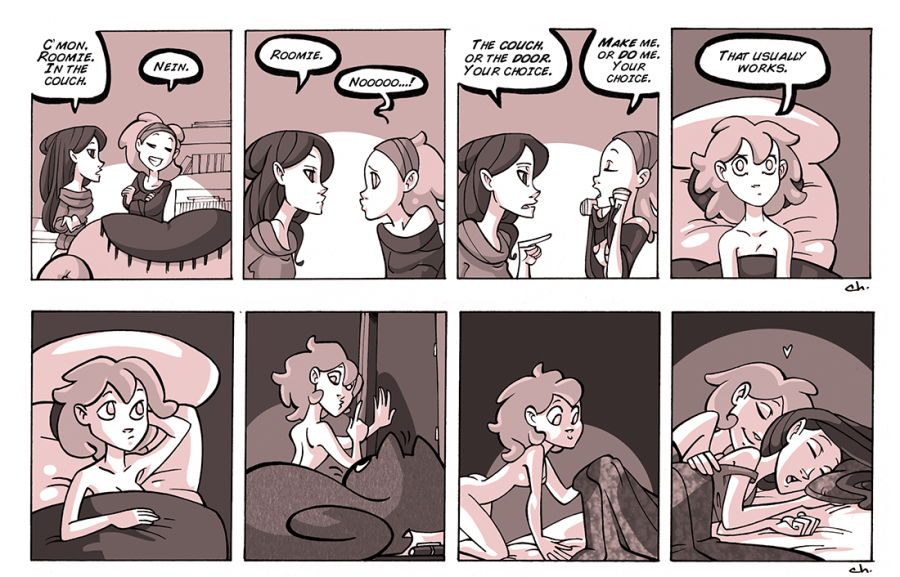 Aaaaand yes, Roomie has much to learn still! Like maybe not crawling in someone's bed naked without their consent? :D

Oof, Mr.Kitteh's weird in that second strip. She's drawn in a completely different style than usual and I especially don't like how the tail looks. But I know I had a hard time giving cats a consistent style in my comics, so here's to learning as time goes and mistakes are made!

First strip: Roomie says "nein"! Which means "no" in German. For some reason, at that time, it just made me laugh having her pop out a "nein" randomly. It was also a way to write "no" differently for every panel, to add a bit of flavor to the joke. Now when I look back, I would've preferred if I avoided using a non-english word, since GGaR is set in a world where there's NEVER mention of country names, specific locations, etc. It's all a blur. Which wasn't intentional at first, but as the comic went, it felt logical, and natural, to keep the setting as vague as possible. My goal with this was to simply let readers be able to imagine Jo's bar just around the corner of their own towns or cities.

This goal has its limit, however. Since the backgrounds indicate at the very least that it's set in a western world. To try to make that vague and unclear would mean avoiding drawing any buildings, doors, even certain objects, or designs of said objects.

And a part of me would've absolutely taken this as a happy excuse to not draw backgrounds at all and say it's all for the comic's sake! But the characters need ground under their feet, and can't walk into void forever, however much I disliked drawing backgrounds then ;)