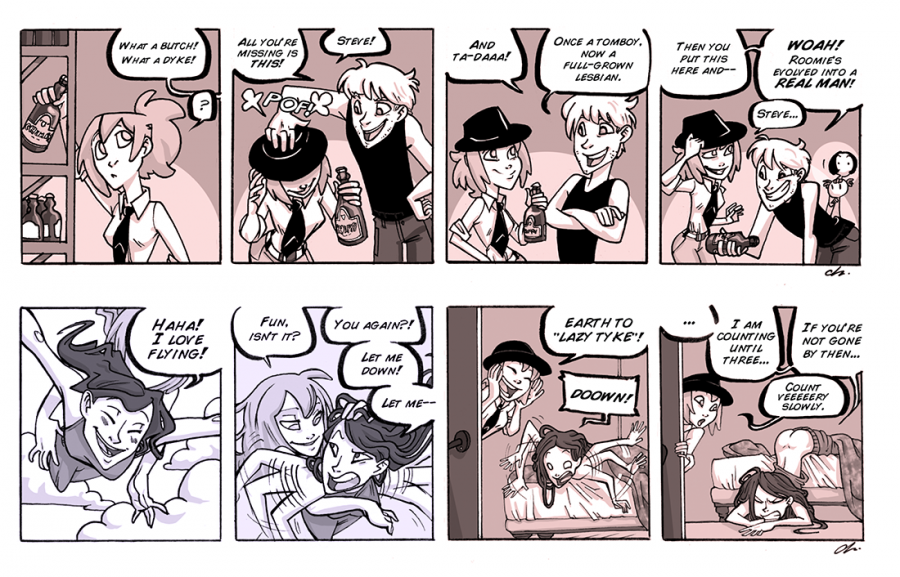 First strip: I had come across the song "lesbian, butch, dyke" and loved it and this strips probably was written very shortly after :)
I read this strip now and Steve's comment on a "real man" sounds different to my ears than it did before: as most of you probably know already, there's a difference between gender and the sexual organs one can be born with! Being a "real man" has nothing to do with what you have between your legs, or well, shouldn't anyway, though our culture has a hard time with that concept and wants, desperately wants, to put things neatly into the pink or the blue box.

AAAaaanyway :D it's also a little comic being silly so here's to both being aware of the problems and enjoying sillies as they are!

Also, I had a hard time drawing the mother and child behind Steve in that last panel, and the result doesn't work too well. Good thing that's something I've improved on!

Second strip: Lillian's first dream we see in the comic! And of course she'd be flying, that's absolutely one of the best feeling's I've had when dreaming (especially lucid dreaming, tends to emphasize the sensations had)! It also represents Lillian's tendency to literally be in the clouds and not very down to earth in her current lifestyle. Though, looking at some of her actions in this chapter, she's more than capable of handling herself and making people respect some of her boundaries, so that's a little "down to earth" side of her I think is very good for her to have (especially with a certain insistent bed buddy).