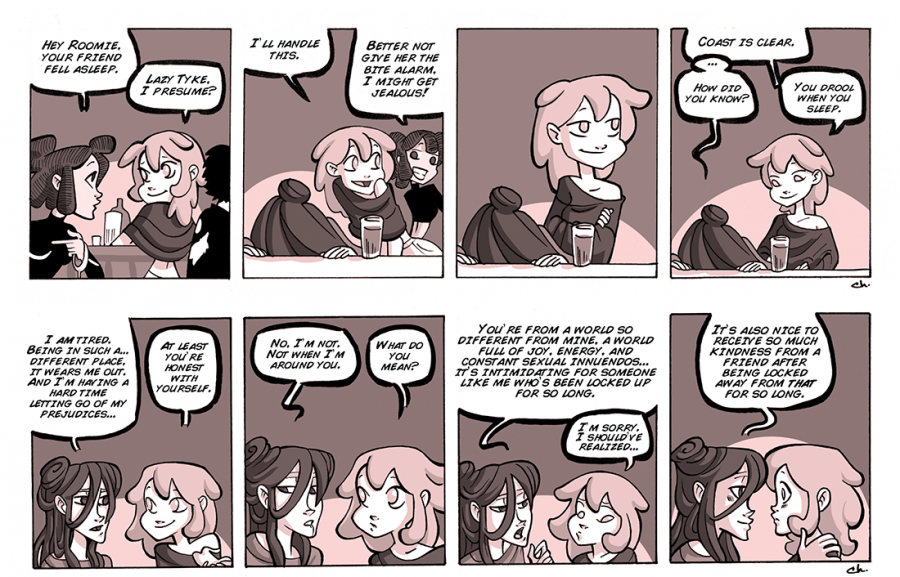 And so does Lillian, wow. That's a big step for her, that last panel. Alcohol must have had a little effect on her again, or not, who knows (I SURE DONT). I'm really proud of her and the kindness and understanding she's showing herself.

Here's something I remember at the time of writing this part of the comic: I had the idea that it wasn't the first time Lillian's been to Jo's bar. That that was maybe why Jo had gotten her a "Special Orange Juice" in that earlier chapter, because that's what she could drink before, and that they had already met before (Jo and her).

It came with the idea that Lillian's shutting off from the world might not have been going on for that long, that months or a few years earlier she was a bit more opened and could sometimes go to drink something, and since Jo's bar was never far from her and Allan's home, she must've been there already.

But as the comic went on, the idea drifted away, the occasion to insert that scene somewhere didn't come up, and the suggestion that it was Lillian's first time to it all remained. But I did like the thought of Roomie discovering that Lillian knew about Jo's bar before Roomie ever discovered it, it would've added a little twist to Roomie's expectations!