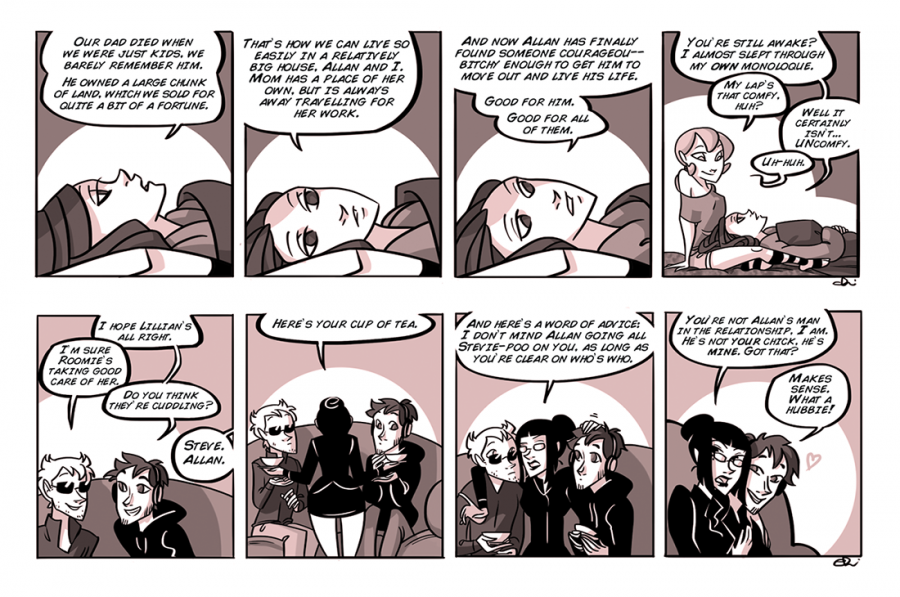 Ah, I forgot to mention last strip that it was at this moment that I switched from traditional inking (with ball pen) to digital inking! You can see the difference in the thicker lines here, and perhaps a little smoother lines. It would take several years for me to go back to traditional inking (for the 1000th GGaR strip!) and even start writing dialogue manually.

It's great to be able to experience different tools and things through any art medium. It makes it more interesting sometimes, it creates new possibilities. Or sometimes it fails and you go back to your previous tool and that's totally fine too :)

Anyway let's talk about Roomie's not uncomfy lap for a second: it's nice.

Now that that's been thoroughly discussed about, let's talk about Evelyne's impressive possessiveness while still being incredibly open-minded about it all: it's nice.

But I feel now that I could've given Allan and Eve a bit more moments together, talk about some boundaries between them two, or show when fights broke out and why and... I'm just curious as to how it'd come out as, apparently :) (didn't know this until now! It's probably it's linked to how much I grew since then and how my own points of interests may have expanded since then... we'll most probably see those points of interests in the new comic "Little Tiny Things" :))