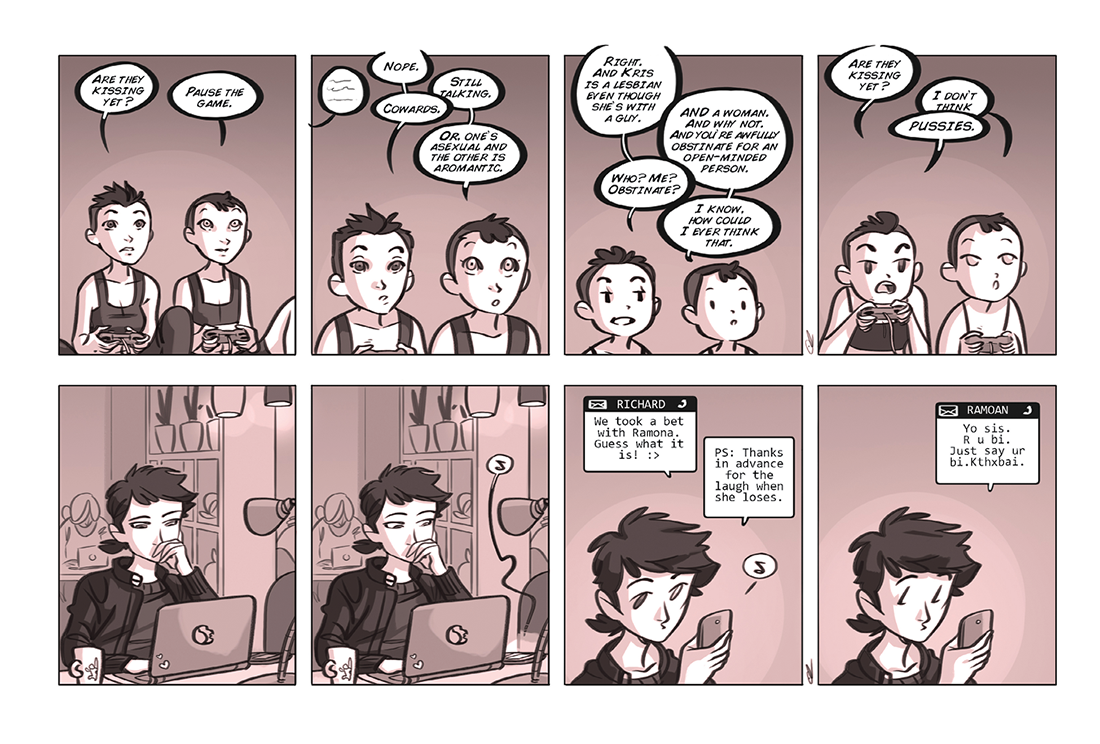 I remember a popular tumblr post from years and years ago, with just the proposed plot of "hey what if an asexual and an aromantic were room-mates??" and my first impression was "oh wow wouldn't that be neat!!" and then a few days later going "waitaminute that's GGaR in a nutshell!"

Not that the terms were much used in this comic, this strip here is probably the only one mentioning it clearly. And it was more of a vibe going on between Lillian and Roomie, rather than a rule applied within the story. I didn't see them as anything but Roomie and Lillian, with their different needs and desires and how they contrasted between one and the other.

Also, concerning Kris: it's one of those story bits I wish I took the time to finally explicitly take the time to explain. I took way too long just throwing bits of "yeah she's with a man but she's a lesbian" without ever explaining the relationship I had in mind for Kris that I feel I just took my readers for a ride without ever giving them a satisfying ending to it. Unless readers were familiar with the spinoff comic "Les3" I did for Slipshine, you could only vaguely guess, and that's not good enough!

So here it is: Kris was at the time going out with a lady she loves and a best buddy she loved platonically, who was the one going out at first with the lady before they became a throuple. The guy's asexual, and wasn't looking for anything sexual, especially with his best friend Kris. And the lady was in love with both.

And that's why Kris is a lesbian and has always been, and yet she's in a relationship with a guy :)

See, that could've been so easily told in one, two strips max. Why didn't I do it? Probably because I thought I had all the time in the world to do it, and then when I approached the ending, I wanted to focus on other stories I wanted to conclude, or just go after.

Oh well! Hope I learned my lesson: even if you have all the time in the world, timing matters!