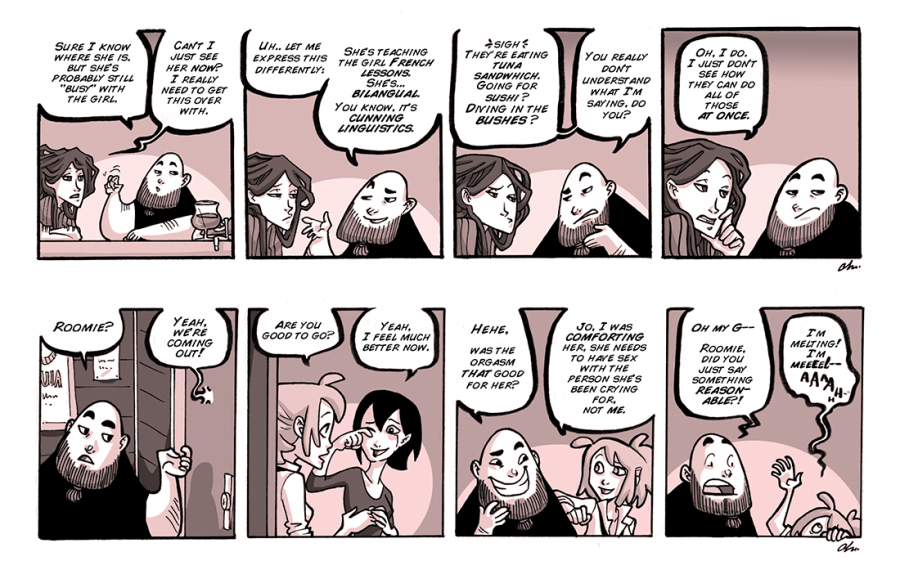 Oh I'm just going to say it: that first strip? Might be my finest punchline. Still makes me giggly now!

That second strip was the first time I explicitly depicted Roomie as not just a wacky lesbian hippie with no boundaries in sight. I wanted to show readers that she definitely had a good heart, just in case some were wondering! ;)

Oh no, I've chattered away so much in the last two updates' commentaries that I find myself at a lack of things to say now! Let's go and have a wee and maybe I'll have a bright and inspiring illumination there.

Okay folks, I have done my wee, drank water, made myself tea, ate bread, put me some nice music in my ears-- INSPIRATION, TAKE ME AWAY!

Yeah, let's talk about inspiration shall we? About how it cannot be controlled, though can be nudged in some cases. Some people have asked me in the past "but how do you find enough ideas and punchlines per week to write that comic?" and it did seem natural... though if I want to go deeper into it, I'd say sometimes I'd find jokes I'd really like and other times they weren't as good, and that was fine! The second strip's punchline above, for example, is to me way less original and funny than the first one. But humor's different for everyone, and I can't control people's reactions either, so the best thing to do was let it roll. If I wasn't satisfied with a strip, I'd tell myself that the next one would be better! And that's the general gist of how I kept doing this comic, despite the mistakes or lack of inspiration at times. Especially for a webcomic that updated three times a week: you didn't have that much time to really think about it twice! (not only that but 5 years into GGaR I started another webcomic that updated 2 times a week at first!)

Time was of the essence, and I was more than happy to continue writing this way without really looking back. It definitely has its perks (like not aiming for perfection but rather action) and some small cons too. Doing all this work solo, and not really giving it too much thought or polishing, it's now harder for me to put more time into any artwork and get back to it a few days later to polish it because someone gave me some feedback. It definitely had its influence on my ego as an artist like: WOAH you DARE question MY creation? And in front of me was just an artist nicely suggesting something like "maybe add a little texture for the background?"