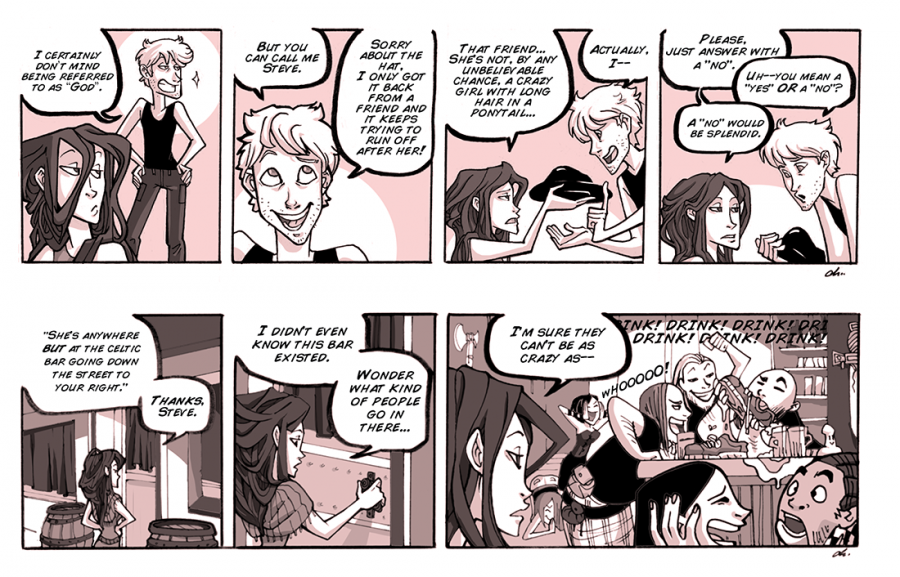 The Kickstarter is OVER!! Thank you SO MUCH for everyone who has contributed to the funding of GGaR Book 3 and the reprinting of the two first books!
If ever you've missed it, the books will be available later on in the Hivemill store page, when everything's printed and all the KS backers have received their copies.

Steve and Lillian! When drawing these first strips of them meeting each other, I didn't have the idea yet of Steve's background story, and his connection to both Allan and Lillian.  And when I did, I went back to these strips to see how they had met and their dialogue and I thought it could be plausible enough.

When I said the other day that GGaR's spontaneous writing worked well for this comic, I didn't say it was perfect ;) These sort of moments especially, when wanting to go back to a character's past and link it with others' when everyone already met and had their interactions... it could've been written better if I at least had an inkling of an idea in mind.

Which is exactly what I'm aiming for, for the new webcomic I'm working on. Even if I don't know the whole story, or even the next chapters, I think that if I have enough of an idea of who the characters are, what their past relations and backgrounds are, and how the setting works, I'll have a much better prepared thread to weave my stories with!

That's how I create comics anyway, mind that there really isn't any rules (perhaps some basic ones, and even then) to how to write a story and each creator have their own ways of doing it. I know I like to start with characters, because that's my favorite thing to write about and create! Giving them life (and love) is how I start any story :)
Then the setting, plot, mood can start building around these people, but not the other way around (not in my case!)

But who knows, maybe someday it'll shift to other ways of writing! No matter what form it'll take, I trust it'll be the right one.