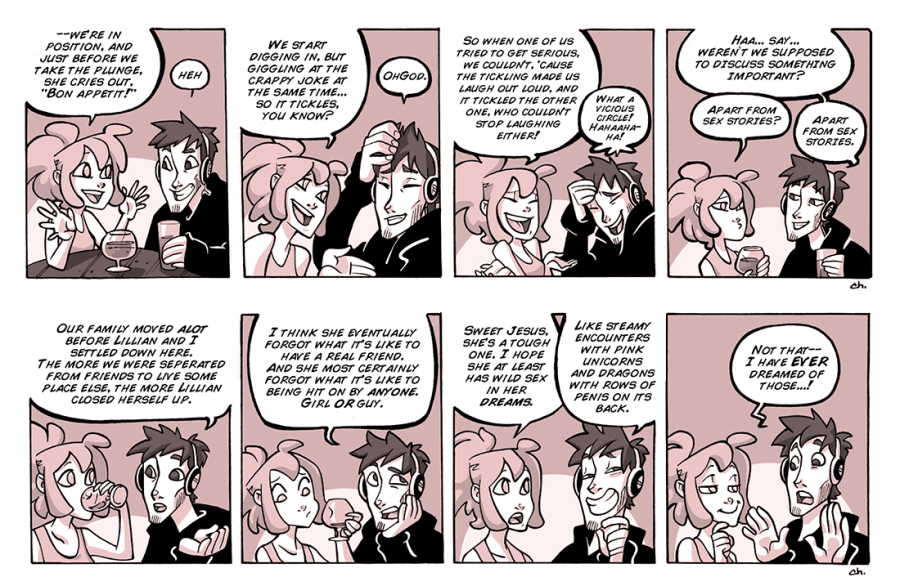 And WOW, I just noticed that little detail of Roomie finishing her beer and next panel, looking at the empty glass with a sad face, nice going past me! I like those little moments in comics, wish I'd use it more in GGaR, but then again, it's not always easy making the best out of four panels to tell a short story *and* get a good punchline in there.

Some people have asked me "how do you always find a punchline, when it's three comic strips a week!" and I answer ¯\_(ツ)_/¯  It was just something I had to do every week, and sometimes there were great punchlines, and sometimes there were less good ones! And later on in the comic there also were moments were the end of a strip was more of a tender moment, something that wasn't meant to be funny, but more of an "awww" or an "oooh". Though I tried to keep those moments few so they had better impact when they came. .. around.

And somehow, I can get easy punchlines when writing comics but if you ask me to tell a joke or something face to face, I will have no inspiration whatsoever. Not for lack of wanting, but I need characters and a minimum of a story between them to get my inspiration to strike.