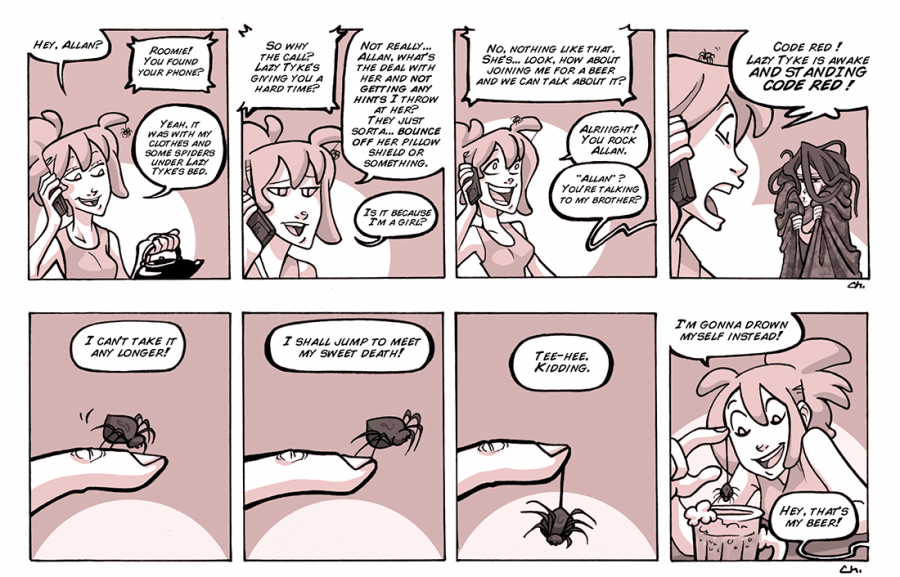 Oh this one has a fun fact! That spider? I thought I'd bring it back as a regular little character. I'm not kidding! I had the idea when drawing these two strips (and probably just forgot about it later on, or thought there were other priorities) and I thought it'd add a fun little gag that would pop back up here and there. Maybe even name the spider, like Roomie named Mr.Kitteh. Maybe even have the spider and the cat interact! So many directions to go, so many choices to make.

It's funny how I drew it with three legs on one side, and four on the other. Poor little buddy, it got one of its leg torn! (let's pretend that I knew that when drawing said spider and absolutely made it on purpose)

Also, that last strip with the spider going to drown itself (Roomie wouldn't have done that, don't worry, she loves both beer and animals too much) it showed a little peek at some dark humor I was capable of. GGaR was never about that sort of humor so I never thought about adding it in, but I definitely had moments of macabre humor that I enjoyed expressing in my art as well (more obvious in a comic like Headless Bliss, probably!)

Oh and Allan calling his own sister "lazy tyke" and immediately asking if she's giving Roomie a hard time... isn't really nice, is it?