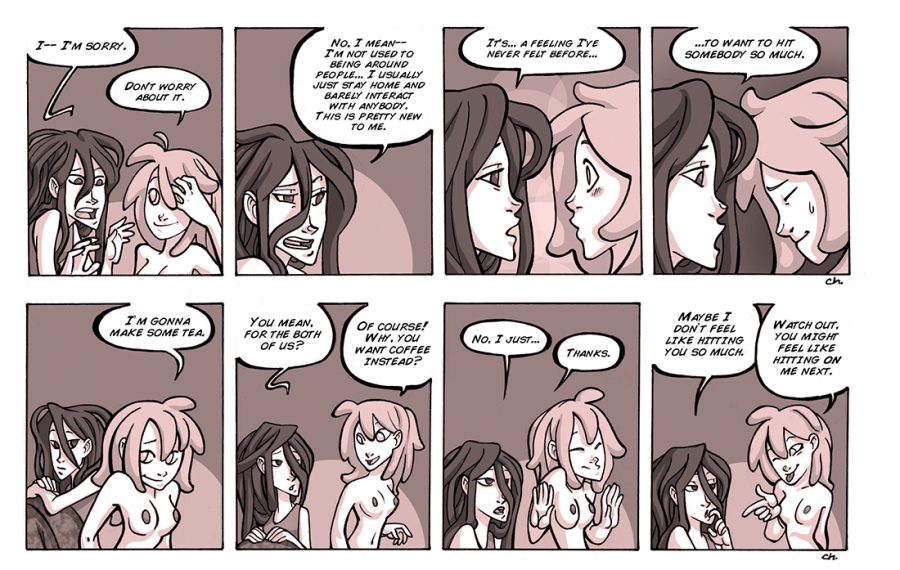 Past chlove probably had it settled in her mind that Roomie was doing Lillian a favor by nicely asking if she wanted tea, how polite, how quaint. Current chlove realizes she's doing this at Lillian's own house and would be more inclined to have Roomie ask nicely if she can make tea and thank Lillian for letting her stay over for it. Two minds, one soul >:D (no, that's not the title of my next webcomic)

All right, enough about all that, what about BOOBIES?

Well okay, since you asked, let's talk about the boobs for a second. I was lucky enough to have a pair of breasts myself to not fall too much into the ridiculous and disproportionate looking balloon boobies, but that's not to say they were always perfectly believable either. For example, Roomie's right boob (our right) in the second strip there, it's mostly drawn as if gravity's working a little different for it, as if instead of weighing downwards, it's on a nice and stable horizontal gravitational pull. That's not how it works :D As perky as Roomie's boobs were, they should still have had a curvier line at the bottom, instead of a triangle form.

There, that's my take on the heavy subject that is boobs.