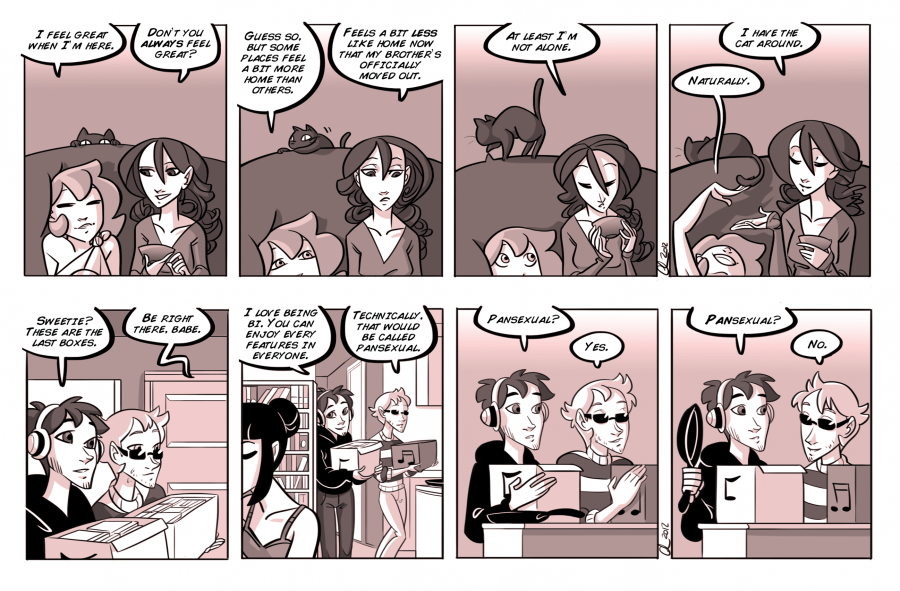 "Some places feel more at home than others", damn Roomie. You felt at home fast, huh? How did I not figure out she was already pretty much in love at that time?

But it's important to discuss about these things so, here's a point I'd like to make (before the next update where more points and rectifications will have to be made):

"Enjoying features in everyone", right now, as I hear it, doesn't necessarily mean you're pansexual over bisexual.

As I understand it, but I know these terms and meanings differ from person to person, bisexual is an attraction towards two genders ("bi" means two), while pansexual is all genders ("pan" means all). Again, some people don't make a different between those two terms, for them "bi" means being attracted to more than two genders, and that's all fine (and in my opinion, not very important either way, they're words, as long as we understand each other, we're good).

(well... unless you say "pan" can't exist because no more than two genders exist, in which case, I'll wholeheartedly disagree with you) ;)

So anyway (I'm tired and rambling, please excuse me), if we stick to the bisexual= attracted to two genders and pansexual= all genders, then you could potentially still enjoy features in everyone. Unless... wait, what DO we mean by features here? Physical features, right? So like, body parts that can be accentuated by either testosterones or estrogens? And sexual organs, probably. Sooo I guess you wouldn't necessarily enjoy every and all physical features if ever you're attracted to masculine bodies, which could be cis boys and trans masculine nonbinaries (and so technically bisexual because attracted to those two genders).

*sigh* we don't make it simple for ourselves do we? :D

As tired as I am, it is still always an interesting topic to me, and I love being able to turn things around for my binary-conditioned brain (I don't know if that's a word but do you get what I mean? We're all very much conditioned since our childhood to think binary, and so it always takes some work for our brain to understand certain things, especially when it comes to genders, which our current society loves to shove into two neat little boxes) (that's why I think it's important to be patient with people who may not have had the chance to do the work until now, there's a good chance it's not their fault for not getting it immediately and it may take a bit of time for their brains to ascend to higher planes of existence)

All right, I'm gonna go take care of my own body and take a nap, folks. See you soon!