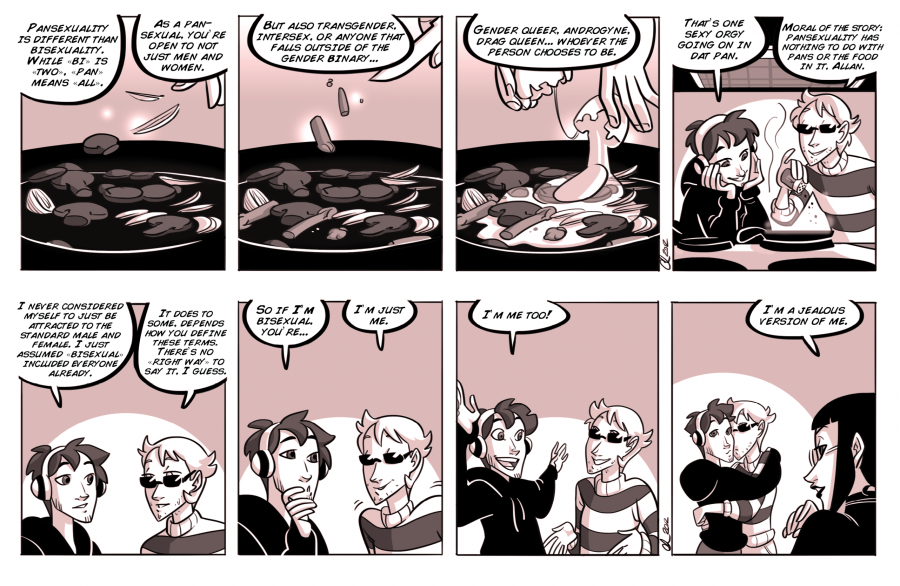 All right, let's get crackin':

"You're open to not just cis men and cis women"

"Cis" means you're good with the gender that was assigned to you at birth. And the one we assign at birth is "that baby has a tiny penis so male = boy" and the tiny vagina means you're an alien (I think that's how it goes, right?)

Let's not get into what they do when they're not sure and the baby turns out to be intersex or we'll be here all day in fury and despair (and what with climate news these days going on, I don't want to add to the anger and sadness we may already be going through right now).

Needless to say, we need some big changes in many, many ways.

Going back to Steve's dialogue:

Like I said in the commentary of last strip, and like Steve says himself in the second strip there, the terms "bisexual" and "pansexual" have slightly different meanings for different people. If you identify with the term "bi" and it absolutely means being attracted to anyone regardless of genders, all the power to you!

If I talk about my own experience on the matter, I remember being very pleased when first discovering the term "pan" and fell in love with it at first sight. I loved saying I was pan, saw that it wasn't a very well known word, and so wanted to share it through my comic! That's how it worked for me :)

Oh and "bisexual" doesn't mean you're attracted necessarily to cis men and cis women, that's one of the other mistakes of Steve's dialogue in the first strip (and my mistake first and foremost). That was my still very binary brain not thinking outside of its neat little boxes yet.

If we stick to Steve's way of thinking "bi" means "two", then any two genders will do, doesn't have to be the two most known ones.

It's not a perfect strip, by far, but back then it was very much appreciated by some readers who thanked me for it, as they might not have heard of "pan" before, or felt it wasn't talked about enough.

I hope there are more and more comics and other forms of media who continue talking and showing their own experiences with the fabulous varieties of genders and sexualities! That way, even if one ol' comic doesn't get it perfectly right, it's fine 'cause there would be plenty of other better ones out there ;)

I do still like the "I'm me" at the end of all that. I still think it's important to sometimes being able to put labels aside, the words, the explanations, the mental effort of it all, and breathe in and out, feel your body and say