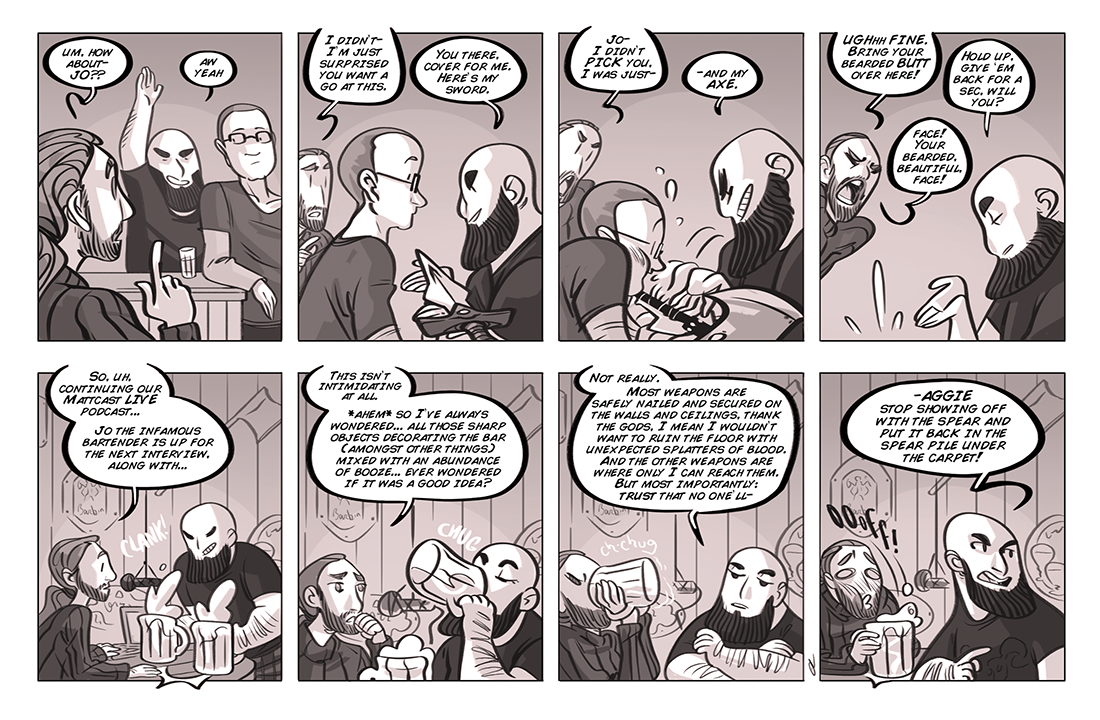 The person in the first strip was a kickstarter backer who had pledged for a cameo of him in GGaR :)

Let's talk about the balance of realism and cartoon-esque situations in comics (because I feel like it and it's an interesting subject!)

Sometimes in GGaR there were situations where certain readers reacted very seriously to what I meant as a humorous situation. The weapons in Jo's bar and how there's a pile of spears under a carpet? Not a real thing (uh, probably) but it made a good punchline! Roomie sleeping around a lot without us seeing a lot of protection but no STDs? (yes, there were plenty of comments about that!) The GGaR cast eating mussels in that last camping trip but where did they keep them for the night and they might die from intoxication (there absolutely was a comment just like that in the first GGaR run). And countless other examples (might find one for every GGaR strip! And there are about 1450 of them.)

So on one hand, I can read readers' comments that suddenly take a serious turn and tell myself "huh, that might be a good thing to talk about, actually!" and on the other hand, sometimes it felt unnecessarily nitpicky and very much off topic (sometimes offensively so haha)

It's a real balance to find. And I feel like I sometimes took too much heed to those comments (I wanted to please everybody! or at least the majority). For example, Roomie later on in this chapter answers one of Matt's questions (that the readers had asked) and I feel like I could have left it alone. But I knew people were curious so I wanted to give them some sense of satisfaction.

I'm not talking much about cartoon-y situations anymore am I? :D the subject changed a little, woops!

It's all about finding one's own place, and learning how to juggle between listening to oneself, and listening to others. You need both! And it ain't always easy :)